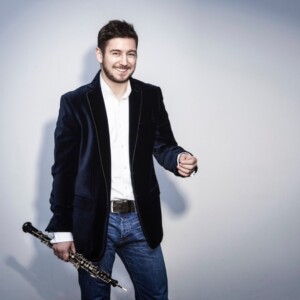 Philippe Tondre has been Principal Oboe in the South West Radio Symphony Orchestra Stuttgart since 2008. He also holds the position of Principal Oboe in the Mito Chamber Orchestra and the Saito Kinen Festival Orchestra Matsumoto Japan. He was born in Mulhouse (France) in 1989 and entered the Conservatoire National Supérieur de Musique de Paris at the age of 15, where he studied with David Walter and obtained his Master’s Degree with distinction in 2010.

In May 2013 Philippe Tondre performed the German Première of James MacMillan’s Oboe Concerto under the baton of the composer and accompanied by the South West Radio Symphony Orchestra Stuttgart. In September 2013 he played the Japanese Première of György Ligeti’s Double Concerto for Flute, Oboe and Orchestra with Jacques Zoon (flute).

In 2012, after his successful debut at the Beethoven Festival Bonn, Philippe Tondre was awarded the prestigious Beethoven Ring Prize. In June 2013 he made his debut in the Philharmonie in Berlin playing Bohuslav Martinu’s Concerto for Oboe accompanied by the German Symphony Orchestra.