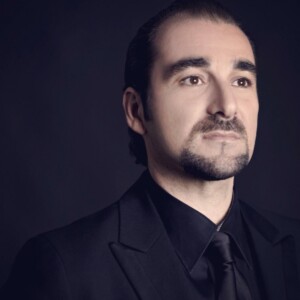 Born in Rhodes, after studying the viola, he began his vocal training at the Athenaeum Conservatory. He won the Maria Callas Prize and scholarship, which allowed him to continue his studies in Munich, at Hochschule für Musik und Theater. Shortly thereafter he made his debut at the Prinzregententheater in Munich as Conte d’Almaviva in Le nozze di Figaro and won the W.D. Fassbaender Prize for young baritones. His discography and DVD releases include Verdi’s Macbeth for Bel Air Classiques with the Paris Opera Orchestra, Dido and Aeneas for Alpha, Francesca da Rimini (Lanciotto) for Bel Air Classiques, Schubert’s Winterreise for Navis Classics, as well as Mozart’s Don Giovanni (title role) for Sony Classical under the baton of Teodor Currentzis.