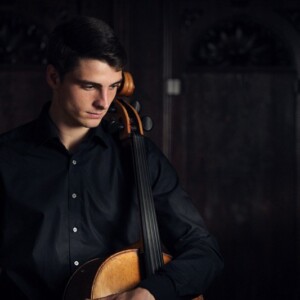 Friedrich Thiele, born in 1996, began his studies in 2016 in the class of Emanuel Schmidt in Weimar.

His artistic education began in the childrens’ group of the univerity of music „Carl-Maria von Weber Dresden“ with Prof. Gunda Altmann and continued at the „Landesgymnasium für Musik Carl-Maria von Weber Dresden“. There, he received lessons from the principal cellist of the Dresden Philharmonic Orchestra, Ulf Prelle from the years of 2006-2011. In 2016, he completed his junior music studies in the class of Prof. Peter Bruns in Leipzig.

Friedrich has been awarded multiple prizes in national and international competitions, such as the „International Cellowettbewerb Liezen“ in 2008 or the „International Dotzauer-Wettbewerb“ in 2005 and 2009. In 2010, he received the first prize (with the highest score) in the Bundeswettbewerb of „Jugend Musiziert“ in the category for cello solo as well as the special prize of the „Deutsche Stiftung Musikleben“. He has been supported by the „Deutsche Stiftung Musikleben“ since, and plays a French Cello from the second half of the 19th century, sponsored by the „Deutsche Musikinstrumentenfonds“.

After his successes at the TONALi-competition in 2015 (3rd prize and audience prize) and the competition „Ton und Erklärung“ in 2017 (1st prize), his international career began. Friedrich was invited to perform as a soloist with the orchestra of the national theatre in Brasília, the Kammerphilharmonie Bremen, the „Rundfunkorchester“ Munich and the Symphony orchestra of Nuremberg. He also is a member of the agency „TONALISTEN“ and has been supported by them since 2017.

In 2018, he played with the „Orquesta Sinfónica Simón Bolívar“ in Caracas and the radio-symphony orchestra of  Prag in Wiesbaden.

As a chamber musician, Friedrich gave his recital-debut in the „Mariinsky“-Theatre in Saint Petersburg and the „Vadim Repin Trans-Siberian Art Festival“ in 2017.

Friedrich was invited to play at the „Heidelberger Frühling 2018“  and in June 2018 he did perform his debut in Gasteig in Munich.

In January 2019, he played the Rokoko-Variations from P.I.Tchaikovski in the big hall of the “Elbphilharmonie” with “Kammerakademie Potsdam”. In August 2019, he will be part of the Molyvos International Music festival.