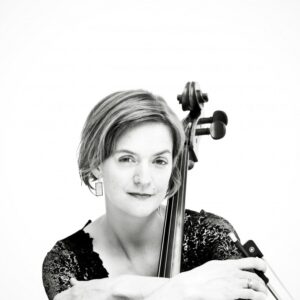 Tanja Tetzlaff continues to perform an extensive range of works, embracing both core repertoire and contemporary compositions of the 20th and 21st centuries. Her recording of the cello concertos by Wolfgang Rihm and Ernst Toch was released by NEOS.

The 2018/19 season sees Tanja Tetzlaff perform with orchestras such as the Tokyo Metropolitan Symphony Orchestra, Staatskapelle Halle, Zuger Sinfonietta and Tampere Philharmonic Orchestra, and collaborate with conductors such as Alan Gilbert, André de Ridder and Jaime Martín. The past season saw solo performances with the Royal Northern Sinfonia, Frankfurter Opern- und Museumsorchester, and Nationaltheater-Orchester Mannheim. In May 2018 she was the “Artist in Residence” at the SWR Schwetzinger Festspiele, where her multiple appearances were met with great enthusiasm from the public and press alike.

Chamber music plays a significant role in Tanja’s career. She regularly performs in a piano trio with Christian Tetzlaff and Lars Vogt, and this season will see them tour in the USA. In addition to this, she will appear in concert with Sharon Kam, Carolin Widman, Antti Siirala, and duet with Dina Ugorskaja.

Tanja Tetzlaff regularly appears at world-renowned chamber music series and festivals, such as the Heidelberger Frühling as well as the festivals in Bergen, Baden-Baden and Edinburgh. She is a member of the core ensemble of the Heimbach Festival “Spannungen”. Her regular chamber music partners include Lars Vogt, Leif Ove Andsnes, Alexander Lonquich, Antje Weithaas, Florian Donderer, Baiba and Lauma Skride, Christian Tetzlaff, Carolin Widmann and Sharon Kam.

Tanja Tetzlaff is a member of the Tetzlaff Quartett, founded in 1994 with Christian Tetzlaff, Elisabeth Kufferath and Hanna Weinmeister. In the current season the quartet performs at the Gewandhaus Leipzig, the Pierre Boulez Saal Berlin and the Philharmonie Luxembourg.

Tanja Tetzlaff and her duet partner Gunilla Süssmann have recorded three CDs together. The first two were released by CAvi-music featuring Brahms (2012) and a Nordic-Russian programme (2008), and their third disc was released in spring 2018 featuring works by Finnish composer Einojuhani Rautavaara.

Tanja studied at the Musikhochschule Hamburg with Bernhard Gmelin and at the Mozarteum in Salzburg with Heinrich Schiff, and plays a cello by Giovanni Baptista Guadagnini from 1776.