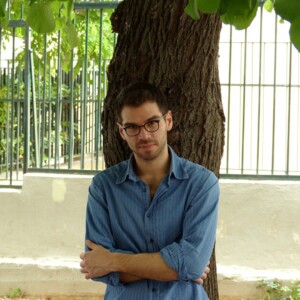 Born in Athens in 1981, Cornelius Selamsis is a composer oriented to contemporary classical and theatre music. He was initially involved in composition and orchestration in the context of initiatives taken for young composers by the Orchestra of Colours and George Couroupos in the early 2000s. From 2004 to 2010 he lived in the Netherlands. He studied composition at the Royal Conservatory of the Hague with Gilius van Bergeijk, Martijn Padding and Cornelis de Bondt.

A large part of the composer’s work consists of theatre music and his collaboration with the directors Haris Frangoulis, Dimitris Karantzas, Akilas Karazisis, Sofia Paschou, Nikos Karathanos. His longtime collaboration with Thomas Moschopoulos, which has resulted in thirteen productions and research on the function of music on Greek tragedy, is a special one. His orchestration of the music of Konstantinos Vita entitled Cohabitation was released on disc by the Onassis Cultural Centre.

From May 2014 to May 2016, Cornelius Selamsis was artistic director at the “Third Parallel Chords” concert series, which included 61 new concert programmes featuring music of all genres. In addition, since November 2015, he has been teaching and coordinating the Music Composition Workshop, organisedby the National Theatre of Greece.