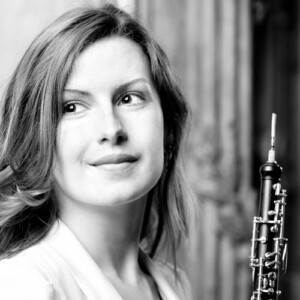 Praised as “one of the finest oboists in the world” (International Record Review), Céline Moinet has been one of the most exceptional performing artists on her instrument for the past 10 years. She is in demand as a soloist with all the major orchestras in the world, including most recently at the Salzburg Festival with Christoph Eschenbach and Staatskapelle Dresden. She also regularly tours as soloist with Dresden Kapellsolisten and Kammerorchester Basel. She signed as an exclusive artist with Harmonia Mundi, winning unanimous plaudits from critics for her recording of works for solo oboe as well as chamber music with harp.

Céline was born in Lille, France in 1984 and completed her studies with highest honours at the Conservatoire National Supérieur de Musique under the tutelage of David Walter and Maurice Bourgue. She continued her artistic training with the Gustav Mahler Jugendorchester and the orchestra of the National Theater Mannheim. At just 23 years of age, Céline won the prestigious position of solo oboist at the Staatskapelle Dresden performing with conductors such as Christian Thielemann, Zubin Mehta and Claudio Abbado. She is also a regular guest of orchestras such as the Vienna Philharmonic and the London Symphony Orchestra. Celine plays oboe and cor anglais exclusively from Marigaux, Paris.