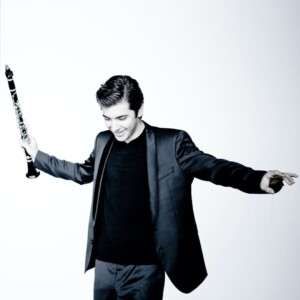 Dionysis Grammenos has been recognized worldwide as one of the most charismatic artists of his generation. His first major international success took place in 2008, when he won the Gold Medal at the Eurovision Young Musicians Competition and the title of “European Young Musician of the Year”, collaborating with the Vienna Symphony Orchestra at the opening ceremony of the Vienna Festival, before an audience of 50,000 and on live TV in than 20 countries. It is noteworthy that he is the first wind instrument musician in the history of the competition to receive this title.
He makes regular appearances in major music venues, such as Carnegie Hall in New York, Berliner Philharmoniker, Amsterdam Concertgebouw, the Barbican Center of London, Vienna Konzerthaus and Cité de la musique in Paris, as well as in live concerts for BBC Radio-3, Bavarian Radio and ORF of Austria.

He has been awarded with the Leonardo da Vinci World Award of Arts, ECHO’s Rising Star Award and the Golden Medal of the City of Athens. He records music for Warner Classics and naïve.