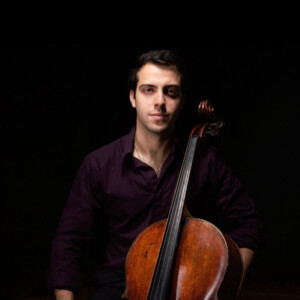 Greek cellist is forging an unwavering artistic path, aiming to evoke powerfully stirring illusions through his music making. He appears as a chamber musician and soloist throughout North America and Europe, most recently as a soloist with conductor-violinist Leonidas Kavakos and the Athens State Orchestra. Timotheos is a founding member of Trio Zimbalist, a piano trio of Curtis Institute alumni which – through a commitment to artistic excellence – carries on the storied legacy of legendary violinist and Curtis director Efrem Zimbalist. Timotheos made his first major US solo appearance in 2016 with the Kansas City Symphony Orchestra under the direction of Robert Spano. He then gained international recognition as a prizewinner at the prestigious International Paulo Cello Competition in Finland. He has also appeared as a soloist with the Helsinki Philharmonic, the Lahti Symphony Orchestra, the Tapiola Sinfonietta, the Israel Camerata, the NEC Philharmonia Orchestra, the Thessaloniki State Symphony Orchestra, and Symphony in C. He is the winner of the 2015 Astral Artists National Competition (USA). Timotheos made his Carnegie Hall recital debut in 2019, performing cello and chamber music works by renowned contemporary composer Leonid Desyatnikov. In 2017, he was named Artist-in-Residence at “Performance Today”, the most-listened-to classical music radio programme in the US. An avid chamber musician, Timotheos has collaborated with important musical figures such as violinists Leonidas Kavakos, Noah Bendix-Balgley, Miriam Fried, Pamela Frank, violists Roberto Díaz and Kim Kashkashian, and pianists Jonathan Biss, Plamena Mangova. He is a frequent participant at the Marlboro Music Festival. Timotheos studied at the Curtis Institute of Music and the New England Conservatory. His teachers include Peter Wiley, Carter Brey, Laurence Lesser, and Dimitris Patras.