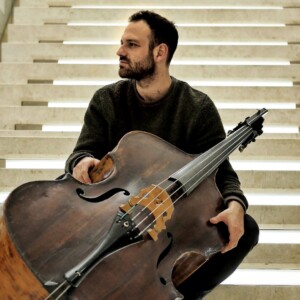 Marco Behtash was born in 1990, in Berkeley, California, to Italian and Iranian parents both connected to the prestigious UC Berkeley University and in a whirlpool of different cultures, languages, and influences. He started playing the piano at age 5 and only as a teenager of fourteen picked up the double bass for the first time.Before focusing his career solely on music Marco had a brief foray into the field of mechanical engineering, another passion and fascination of his. Finally, however, at the age of nineteen he decided that playing music with other people made him feel alive in a way that nothing else had before and that that was the path to follow,leading him later to study with the legendary Rinat Ibragimov in London.

Since then Marco has played around the world primarily with great orchestras,including the London Symphony, Royal Concertgebouw, Rotterdam Philharmonic, Royal Philharmonic, and San Francisco Symphony Orchestras, BandArt, and the Nederlands Kamerorkest. Since 2016 he enjoys being sub-principal double bass the Orchestra of the Royal Opera House in Covent Garden, London. Over the past year she has especially enjoyed working with great artists including Gordan Nikolic,Bernard Haitink, Joyce Di Donato, Joseph Calleja, Christian Zacharias, Janine Jansen, Dimitri Hvorostovski, Renee Fleming, Placido Domingo, Antonello Manacorda,Valery Gergiev, Batio Hagony, and many others.

In his free time Marco enjoys sports, being in nature, reading, going to concerts and cooking. Marco usually plays on an English instrument attributed to John Devereaux(London, ca. 1830) using gut strings (metal-wound or uncovered) and enjoys using a variety of bows ranging from baroque to modern.